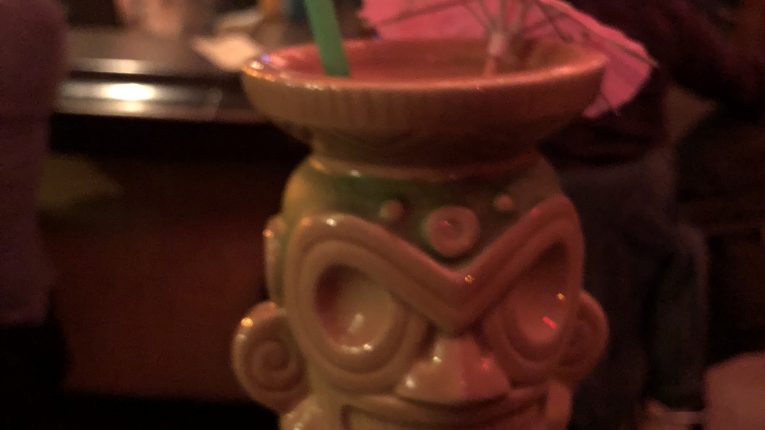 The Auto Show brought me into a cold cold Detroit in January. For the past few years I have been hoping that a tiki bar would re-emerge in Detroit. A long time ago there was Chin Tiki but then nothing since that closed in 1980, until Mutiny Bar kicked off the return of tiki in Detroit. 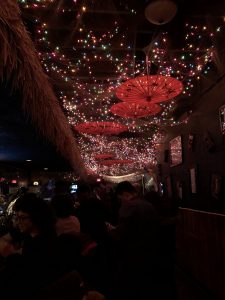 Not too far from downtown but still requiring a car to get there, Mutiny Bar is quite small. In fact I would almost put it in the size class of Tiki-Ti in LA, maybe a tiny bit bigger but not by much. The ceiling is festive with Christmas lights strung about, though this could have been because I was visiting so soon after the holidays. It was really crowded when I was there too, and I ended up standing next to the door while we there – coldness! At the time there didn’t seem to be any way to make a reservation, but I don’t expect that to change.

The Menu and Drinks

Not really big as you can see from the picture here.  All of it originals with the exception of the Painkiller. Quite a lot of the drinks don’t actually feature or include rum, which is fine, but not exactly in line with my tiki world 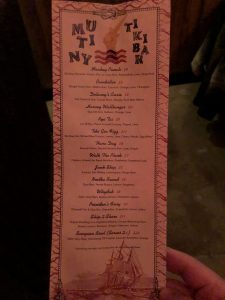 view of Tiki = Rum. But I digress, I was game to try. I tried the Monkey Punch, right at the top of the list. Scotch, Rum, Passionfruit, Lime, and Grapefruit. An odd one this. Scotch and Rum were a weird pairing, but it was still tasty. For my next beverage I went off book and had them make a Mai Tai. There do have the inventory to make some of the favorites and this proved as such. The bartenders were very knowledgeable and once you got their attention, they were able to whip things up quick.

Mutiny is a little bit dive-y but it’s still a solid tiki bar. I’m not a fan of the menu so much with the focus on Gin and Scotch and Whiskey having equal footing with rum, but to each their own!

A quick ride from downtown. Cozy.