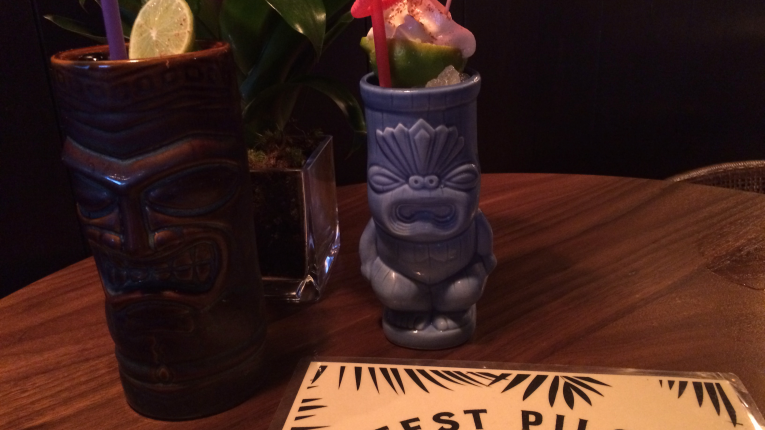 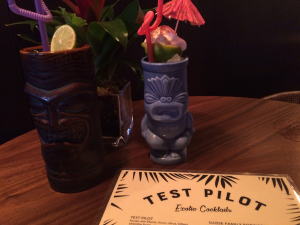 Named after one of Don The Beachcomber’s creations, Test Pilot has finally answered the (mine) call for a Tiki Bar in Santa Barbara. I have been waiting for someone to fill the void and thankfully I was not disappointed. Taking the space of a former wine bar, it’s only a few feet from State Street. It’s even on the beach side of the train tracks which is such a plus, I can’t even stress how great that is.

See, the thing about bar hopping on State is that your typical room is most likely going to be on beach side of the train tracks. That’s where the small little hotels and motels (and of course Fess Parker) are all at. There aren’t really a great amount of hotels on the other side of the freeway. What does this mean? Well, from your hotel to a tiki bar is quite close! So it’s good for an immediate opener to the hop or a great closer. Win – Win !

The decor is simple and effective. There is a cute sitting area right at the front that includes several comfy chairs as well as a 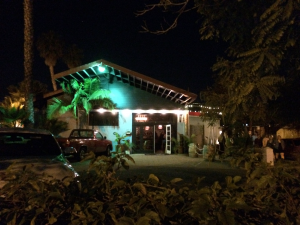 sofa. An alcove about mid-way through provides for a separate room experience without being fully disconnected from the rest of the bar (and seats probably 12). Finally there are a couple high tables and then an L-Bar that seats 8. I can’t imagine that the seats would be very comfortable for more than one, mayyyybe two beverages as they are on the high side and don’t have backs to them. There is a patio out front but I’m not sure if they use it as there were no tables there. The patio could be a spring/summer only type of deal.

The menu is small but well curated. They even have a couple non-standard slushie beverages that are on tap that I would love to try next time (Painkiller and an original called ‘Mango Drank’). Went in for my usual Zombie and it was made really really well. In fact it tasted just about how I like to make them which follows Don’s recipe very closely. I would put their mixture right up at the top of my favorite Zombies. Also had a Mai Tai (like I do) but sadly right about the 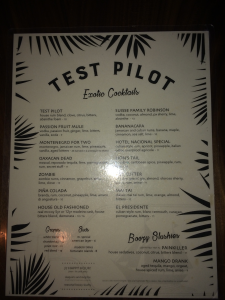 time I started try and enjoy this beverage, my sinuses decided to take over and shut down my ability to taste anything. I had my wife taste it and she gave it high marks, and with the 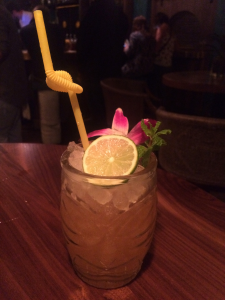 quality of the Zombie, I don’t doubt it.

She ordered a Test Pilot and also loved that too. It came topped with Absinthe foam which was super tasty. There was some discussion on whether it would better to first lick the foam off, mix it into the drink, or just let it naturally settle into the beverage as it was consumed. She opted for half lick and then mix into the drink. I think this was a good call as you get to taste the odd sweetness of an Absinthe foam. The rest of the foam then can integrate into the drink. 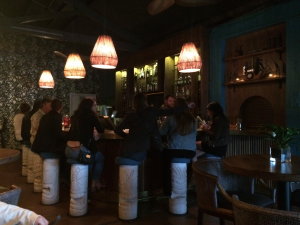 A perfect antidote to the myriad of wine tasting rooms and craft beers that surround State Street, I hope to come back here again on my next trip to Santa Barbara.

Just barely off state street near the train station. Early afternoon is chill and empty on weekends.