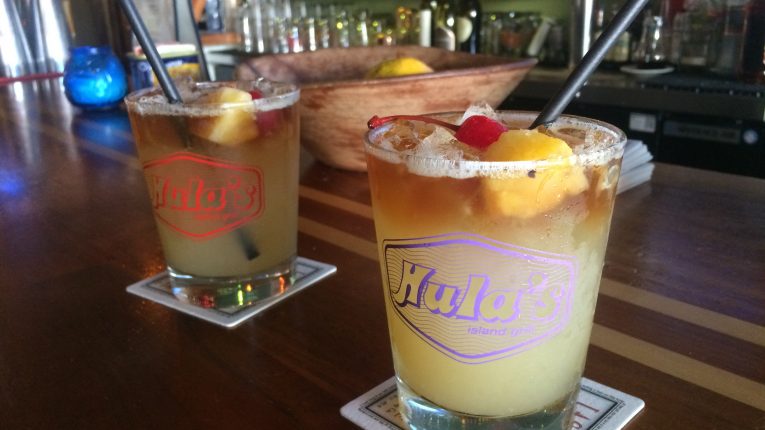 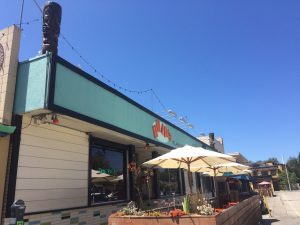 Hula’s Island Grill is a small chain of two restaurants around the Monterey Bay in California. While I had actually been to the location in Monterey, I recently went to both locations. Thought now with both fresh in memory, would be appropriate to get them both onto the Tiki Hut.

The Santa Cruz location, is in an area that I somewhat assume is a downtown-esque sort of place. We walked there from the Wharf, and noticed a multitude of little eateries and clubs peppered about the area. Now it’s not super close to the Wharf but it is walkable. When you approach there is a nice little street side area that 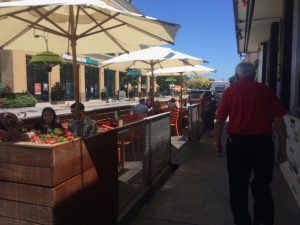 looks nice for lunch along a quiet street. Inside is reminiscent of more of a surf bar than tiki. It wasn’t too busy but we opted for the bar since we were in for a quick snack and beverage. Popping my head around the corner of the bar I saw a moderately decorated “Tiki Room” that was a little more in line with what I 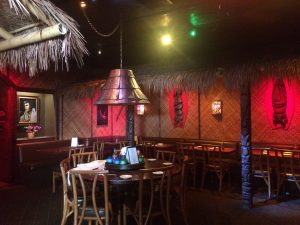 thought the rest of the restaurant was going to be. If you came back on Friday or Saturday, I’m sure they use this room, maybe.

In Monterey, Hula’s is only a few blocks up from the water and a few over from Cannery Row, all very walkable. The main eating area here is a little more “woody” in theme. There isn’t room for a patio out front but out back there is a quaint little space with several small tables and a larger couch area for a group. There is also a satellite bar back there I have never seen used both times we have been here. The several times I have been to this 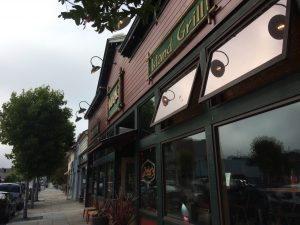 location, we have always sat in the back patio and I think I would actually prefer it to the inside anyway (as long as the heaters are on – Brrrr!).

The menu is not very large and there are a few classic beverages on the list. Looking at the menu, you’ll see that the ingredients are not true to classic recipes as Hula’s has added their own twist to most of them. Where this did not work was the Zombie. It was really just a sweet tropical passion fruity 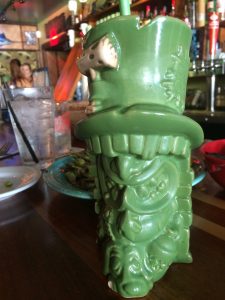 drink with some forgettable rum that was pretty watered down by the juices. Unless you want something sweet and juicy, I’d give this one a pass if you’re looking for something Zombie-esque.

The Zombie wasn’t quite what I expected. The Mai Tai too would be highly suspect but thankfully I was surprised! While on the surface it seems like you may be getting a Hawai-Tai, it was and it wasn’t. (Hawaiian style Mai Tai, mostly pineapple juice with some almond syrup and white rum, floater of dark rum) 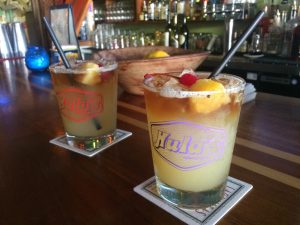 surprisingly tart version that actually wasn’t too sweet or pineapple-ey and was pretty well balanced with a tasty float of JWray Gold atop! A treat!

If you check the website, it shows there are two other restaurants in the family of Hula’s Island Grill located in Phoenix and Scottsdale (Both named Hula’s Modern Tiki). They both have similar drink menus to their California cousins, though the food menu looks to be a little more refined. The food at both the California locations was great and I would classify it as Thai, not bad. 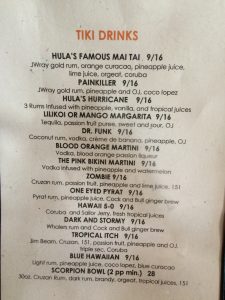 Both Hula’s Island Grill offer up some nice Tiki and while I didn’t approve of the Zombie, the Mai Tai brought me around and I look forward to what other concoctions they have to offer on the next time I’m around. 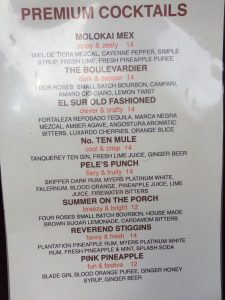 At the Monterey location find a seat out back or grab the couch section. In Santa Cruz see if the Tiki Room is open. Go for the Mai Tai.