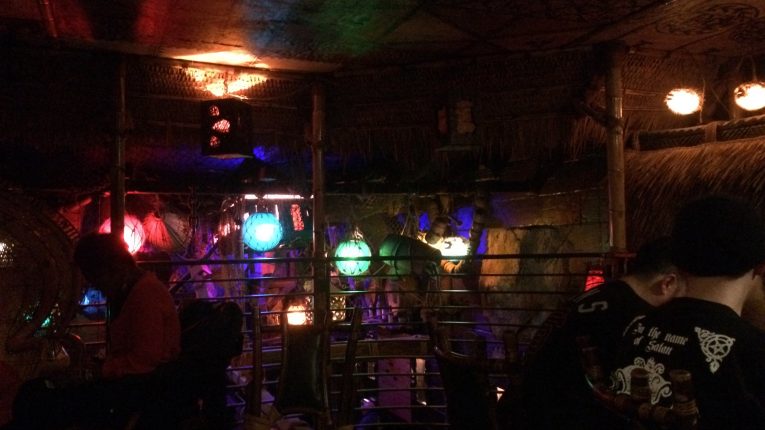 Hidden behind a blacked out window in the Fillmore District of San Francisco, Smuggler’s Cove is truly the center of the Tiki Drink resurgence. The menu here is quite daunting and it could take a newbie some time to land on something. But fret not! The bartenders and staff here are more than ready to help find something to satiate your tastes. Plus for the seasoned – if there is something you’re really looking for in the Tiki Drink realm that you can’t find on the menu – well, 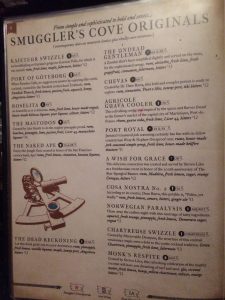 they have ALL of the mixers to make absolutely everything happen. You’d be hard pressed to not find everything you could want in the current menu. For us rum nerds, it’s a great menu too. The menu is coded with numbers that show you which of the many many rums that could be used in your beverage. A directory of rums is also included in the back.

Smuggler’s Cove is quite small; Broken into three floors, there are only two bartenders, one in the basement and one at ground level. Because of this, and the small size, they limit the amount of people who can be in here. So if you’re thinking about coming on a weekend, prepare for a line. I really recommend coming any other day besides Fri and Sat. You’ll enjoy yourself much better. 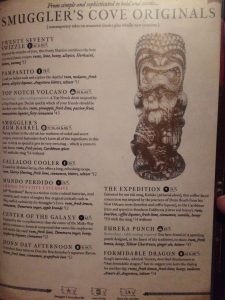 I have been here several times and I try to explore something new every time I go. It goes without saying that a couple of my absolute favorites (Zombie – Three Dots and a Dash) are fantastic here. Also the classic Mai Tai is perfect. So this trip, I gave a go on something new called the Demerara Dry Float. A bit like a Mai Tai, it’s quite sour but has some real slight different hints of flavors just hiding around. The Demerara Dry Float also comes with a sidecar of Hamilton Demerara 151. The intention of the sidecar is that you can drink them separately to balance the flavors, or mix it in, half and half, whatever. I actually tried to seek out the ingredients when I got home to make it myself it was so good (the key stuff is Maraschino Liqueur and Demerara Sugar Syrup).

I had one beverage here once called The Expedition. Martin Cate (the owner and also the

owner of False Idol in San Diego) came up with this beverage that is described as representing the travels of Don The Beachcomber. The Expedition is certainly an interesting beverage (it has a coffee liqueur in it among other things). The drink also has an awesome glass you can get – it was custom designed for Smugglers Cove.

The first time I came here I was pretty new into appreciating all things tiki beverage, when I was discussing with a cohort who was with me, how I had discovered the DTB variety of a 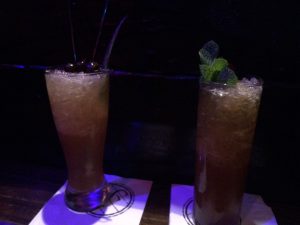 Mai Tai and the recipe that I had found to try and recreate it (this was before the wonderful Total Tiki app was available). Well the bartender overheard and said that I had found everything right BUT I should replace the Cointreau with Orange Curacao to make it that much better. Helpful!

I’ll go on record as saying Smuggler’s Cove is currently the best Tiki Bar in the US (that I’ve been to). If you can’t make it here then it’s sister bar, False Idol, in San Diego will really give you the idea of what you’re missing up here. But just don’t come here on a Friday or Saturday, really!

Sunday thru Wednesday are the best days to come. Look