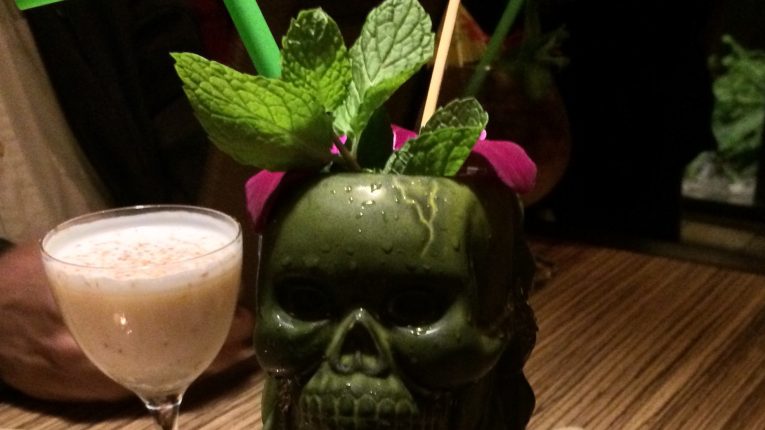 Update 10-01-2017: New menu. Lots of options compared to before. Haven’t had a crack at anything new yet but looks pretty awesome! 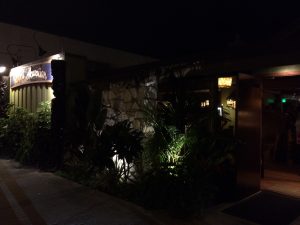 Continuing a trend of new tiki bars opening, the Royal Hawaiian in Laguna Beach originally opened way back in 1947. it closed a few years ago and, after a renovation, has reopened as a pretty great destination for any tiki fan. The decor is of island style, palm fronds, lots of flowers. The restaurant has a soft seperation from the pretty crowded bar area which is fairly modern. The food menu is small but varied (I dont partake of the seafood and there were plenty of options). Now with all that out of the way, lets get to… the Drinks! 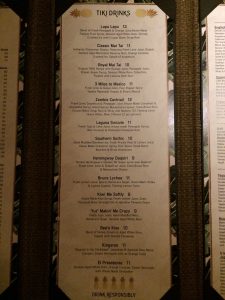 I was pleasantly surprised by the menu. When I had originally looked up this place, I had found a menu which now I think may have its past life, right before it closed and only had a couple tiki style drinks on it. The current menu isn’t huge but there are some good options. This place is known for the Lapu Lapu. I cant find info to say that definitely that this drink originated here at the Royal Hawaiian, but my extensive research (of typing the name into the search bar; Hard work) only references either the Royal Hawaiian or “polynesean restaurants”. So lets just say, one of the first!

Right. So… The Lapu Lapu (also known as the Chief Lapu Lapu) is their most featured drink and both the people at my table who ordered it both enjoyed it. I had a quick taste of one of theirs and I would agree with the general characterization that it is a slightly sweeter Mai Tai. It comes served in the traditional snifter that a Lapu Lapu requires. For my usual main tasting drinks, I went right to the Zombie and Mai Tai.

The presentation of the Zombie is great; Garnish is well done; Its tiki glass is huge and fun. My first swig of this massive concoction was, woah, very creamy – perhaps the creamiest I’ve had, almost as if there were egg 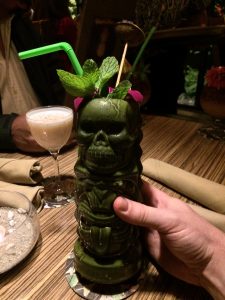 whites in it. Quite odd. Additionally, this drink was very sweet. Not something I would really expect from a drink as storied as a Zombie. It is definitely a potent drink though. Not lacking there. The rums are exceptional as well. It was quite a large drink for sure and with it being so sweet and creamy, actually made it a bit hard to get through. I wouldn’t write it off though – just know that this dude is more up in the dessert category with something like a Painkiller. Maybe they should have called this drink the “Double Tap – It’ll finish you off!”

The Mai Tai was done in the Trader Vic style (orgeat, curaçao) and wasn’t particularly flavorful. Presentation was great and there was clearly some care that went into making it, but there wasn’t anything to notable about it. 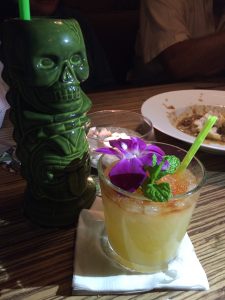 I would have expected a little bit of tartness to it but I wasn’t getting that at all, maybe a little light on the lime and bitters. I do love that they use fresh flowers in just about all of their beverages. Always a great touch.

I am looking forward to going back here again to try the others on the list and for no other reason than it is a pretty cool place to hang with good food and good beverages right on the California coast!