The Queens Park Swizzle has become my favorite. For a long time it was the Three Dots and a Dash, but the frosty swizzle has over taken it. Concocted in the 1920’s at the Queens Park Hotel in Trinidad, Angostura, has been lobbying to make the Queens Park Swizzle the official drink of Trinidad & Tobago. Angostura is famous for their namesake bitters and from what I’ve been reading, they may get there on making the drink official; For good reason really, it’s a fabulous drink that is quite simple in its ingredients but really highlights the rum and bitters, plus gives you a little minty smell to go along with it.

I have had this at several places recently (Hale Pele, Trader Vic’s Tokyo, Trader Sams), and it was finally when I had the Trader Sams version that I realized that this one is making a comeback as a popular rum drink. Incidentally, the drink is called the Safari Swizzle at Trader Sams if you ever try to look it up. Anyway, I again came across this drink at a, sadly, temporarily closed new restaurant at Mandalay Bay called Libertine Social. They in fact had a bunch of different swizzles, including this one. Hopefully I’ll be able to try them out if they ever open back up. The sign out front said reopening 11/30/17 but we’ll see.

So again what makes this drink fun is the method you use to make it properly. It will result in a nice thick frost on the outside of your Collins glass. The best presentation usually includes a cocktail napkin bib to keep your hands from freezing. Okay, enough of all that – On to the Recipe!

I admit it takes a while to get the right amount of frost going on the glass, but spend the time, it makes the drink that much better to enjoy! 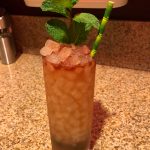