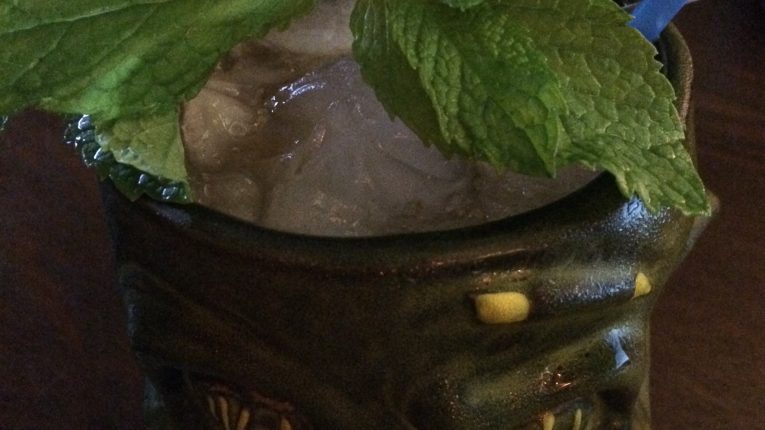 It all starts with this one. No really! The Zombie is the one that more or less kicked off the line of drinks we love. This drink, plus a Mai Tai, are my biggest go to tiki drinks. Ordering one or the other really informs to how the rest of the drinks at an establishment will lean once tasting these (sweet, strong, flavorful, quick, simple, etc).

So, the Zombie is the grandaddy of all tiki drinks. They typically have no less than 3oz of rum in them, usually a mix of different types; Most places will limit you to only having two of them, because yeah that whole over 3oz of rum each thing – and one of them will be a 151 overproof – yipes!

This is in my top five favorite tiki drinks. But boy is it powerful so be careful and show it some respect. It’s no wonder this drink got it’s name after Don The Beachcomber made one for a friend of his (or maybe three) before the friend went on a trip. When the friend returned he noted that he felt like a Zombie for the days after because of it!

Here’s the recipe that I use:

Some things to note:
What’s Falernum? Well, it’s the magic tiki elixir that is found in many of the best drinks – you’ll recognize it’s familiar smell if you have ever had a tiki drink. I have three different Falernums that I cycle through and they are all  similar but, for example, one is a little more boozy than the others – the particular one I use for this recipe has a more pronounced smell.

What is Don’s Mix? It’s one of Donn Beach’s secret ingredients which turned out to be a syrup made of grapefruit and cinnamon. I buy it pre-made.

Finally, the Overproof rum: The big thing that we all (tiki aficionados) wish we had was the ever elusive Lemon Hart 151 Demerara Rum, which is what this drink should really be using for it’s Overproof rum. While the lemon hart name looks like it was bought up by someone and it seems like they are ramping up production, I don’t know of anyone who has seen it come out to the greater U.S. yet – so in the meantime, a rum enthusiast has made their own and it’s pretty great (that’s the Hamilton Ministry of Rum brand).

Share
Previous: Tiki Bar Review: Don The Beachcomber
Next: Here it is!