Deeply nestled in the labyrinthine interiors of the New Otani Hotel and what I assume is an office building near the Nagatacho station in Tokyo is the tiki oasis of Trader Vic’s. I only discovered this restaurant/bar a scant year ago when I was newly into my tiki adventure, maybe for the best, for had I happened upon this earlier I’m sure I would have spent too much time there and no where else in the many years I’ve been going to Tokyo. The restaurant has been around since 1974!

Back in the 50’s and 60’s, Trader Vic’s ballooned to about 25 locations – but then along with the dying out of tiki, so did Trader Vic’s. A few hung in there, the quasi-original location in Emeryville, Ca. and the Mai-Tai bar at the Beverly Hilton for example. The Tokyo restaurant opened when the New Otani opened back in 1974. The original-original was in Oakland, Ca. but finally had to relocate due to what reads to have been a necessity as the building was neigh on being condemned. In 2009 they tried opening a bunch of new locations and some of them still exist, like a bunch in the Middle East.

Anyway, while the Japan location was built in 2009, the vibe in there is that it could have easily been built in the 60’s and never moved on from there; And that’s a good thing! When I first visited this place I thought it was closed, greeted by a host wearing what I thought was her purse, leaving for the day – but she was not, that was just part of their costume. When I was taken back in to the restaurant I was surprised by a large throwback to classic tiki and the standard Trader Vic’s menu of great beverages.

I should note that it was a little hard to find this place. When you exit Nagatacho station (Exit #7, then turn right over the bridge, New Otani is first high rise on your left) and get up to the New Otani complex you need to skip the first entry you come to otherwise you’ll be in the office complex with a bunch of escalators and in the wrong place. You need to go through the second set of doors into something looking vaguely mall-ish – pass the escalators and look for red elevator doors on the left. Also a little of a challenge is reading the menu – while the titles of the drinks are in English, the descriptions are not. I did cheat and look up the Emeryville menu online which is almost identical. 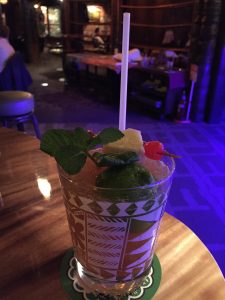 i Tai.  While technically Don The Beachcomber had something called the Mai Tai Swizzle before Vic did, Vic definitely made the Mai Tai popular with his version of it. If someone says Mai Tai and you immediately think of pineapple, then you haven’t had aclassic Trader Vic Mai Tai before. Vic Bergeron invented the Mai Tai while working as a bartender at the Royal Hawaiian on Waikiki. Since he left, the Mai Tai evolved there into it’s Pineapple sweet version. Anyhoo, start ith the Mai Tai here and you’ll get treated to the original fantastic version as it was meant to be made. Everything works about this drink and the presentation is flawless. 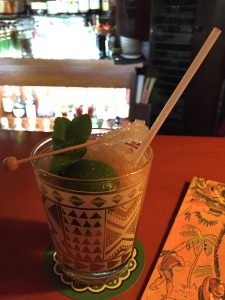 My next favorite beverage here is the Navy Grog. While created originally by Don The Beachcomber, the version here is probably the best I’ve had anywhere and I especially love that it comes with a rock candy swizzle so that you can ‘set’ your own sweetness in the drink. All the ingredients are really balanced well in their version and it truly is a gold standard of how they should be made.

Another great tiki standard is Trader Vic’s Grog. Completely different than the 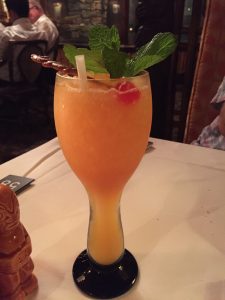 Navy Grog, the Trader Vic Grog is a much sweeter, not very potent beverage but highly drinkable and tastes great. Plus the glass it comes in is so great! Look at that thing!

Last couple things to mention; The Zombie – I don’t think they should call it that because it really has hardly any resemblance to what a Zombie is and is more akin to a Trader Vic Grog than anything. I give it a 2 out of 5 because well, it still has rum in it and rum is good, but yeah – nothing like what a Zombie should be. Second thing, sorry I didn’t take a pic of the menu – but it’s in Japanese anyway and if you look up Trader Vic Menu online you can find pretty much what they have at the restaurant.

So Trader Vic’s, a big win and something to look forward to when you’re in the middle of an extended stay in Japan and looking for a tiki retreat!

Hidden within the hotel and hard to find. Full food menu that’s well rounded but very pricy. Drinks are quite expensive as well. Bar area can get quite smokey at times. There’s usually a band on the weekends – and during the holiday season you may catch a hula show throughout the whole restaurant.